I came across this game the other day, it is yet another of countless Manic Miner influenced titles…what makes this entry any different?

Well, the scenario is a tad unusual – The title character Mr Wino  went on the ultimate bender and slipped into a booze infused nightmare slumber and needs to escape his personal hell by collecting wine bottles that unlock gates in his dream world. Mr Wino was released in 1988 but it looks as if it was shelved for at least four years, the visuals could be described as primitive and hardware collision registers are used which is nearly always a telling sign.

If you think I am being negative about the game from the last sentence, don’t jump to conclusions. To be honest I don’t mind playing games of this type once in a while, there is a strange compulsion to keep at it once you settle in learning the monster patterns & level layouts, I guess that old ‘…just one more go’ quotient – it is difficult to explain but there is a reason for the huge popularity of these kind of games.

Mr Wino’s sprite is reasonably animated, looking something like a cross between Gonzo and Q*Bert. There is not much in the way of notable special touches concerning the graphics, it is possible to turn Mr Wino 180 degrees toward the screen in order to climb ladders and this is accompanied by a small animation.The hostile things in the game resemble stuff like frying pans, gasping blobs, rotary phones and bowls of pasta, the gfx are functional and that is all that is required for a game of this type.

I mentioned the monster patterns earlier, something interesting is with most of these games the movement patterns are strictly uniform & predictable but some monsters in Mr Wino have an element of randomness, just when you thought it was safe to ascend that ladder the nasty changes it’s mind and heads back in your direction! For this reason the game seems very rough going without cheats and I played the game for quite a while and came to a level that seemed unfinished, but the truth is you wouldn’t actually reach anywhere near this section anyway.

Stryx – in the travel tubes 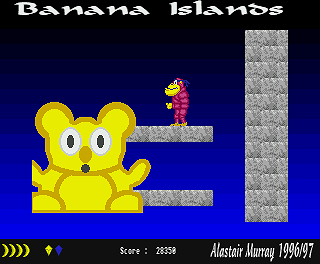 I added an Atari VCS (2600) page for Stella Emulator cheat codes I had done, there are not many there at the moment but I hope to fill it out a bit in the future.

Here are some codes I came up with for this pretty decent brawler. If you find the game a bit of a slog try the first code or if you just want maybe a better chance of survival on the harder modes try the other that make the fairly sparse energy pickups like soda, chicken etc fully replenish your health bar. See-ya until next time, enjoy!

Trinket pickups (ghetto blaster,piggy bank etc) increase health instead of score. Can be used in conjunction with above codes – Japan version ONLY.

Well, to be honest I have been a bit slow kicking into gear in 2017 but you have to start somewhere so here are some POKEs I cooked up and added to the collection. Rather than have a gazillion posts I am going to update this one with new entries for the time being, so if you are interested in C64 stuff you might want to watch this space