I was playing this the other day on my tablet and thought it would be good if you could keep the  weapon power-ups you had accumulated after dying.

Achieving this was actually quite simple since Galoob had already done a bunch of Genie codes to always begin with a specific power-up, so I just dissected one of those codes as a base and then tailored it to what I wanted. So anyway, the following codes will let you keep the exact shot-power you last had before biting the dust

I haven’t spent a lot of time on this game as of yet, but it seems like a pretty cool clone of Techno’s  classic brawler Renegade with serious shades of ultra-violence inspired by something like Amiga contemporary Doman.

Much like the aforesaid Techno’s game over-the-top brutality such as whaling on downed opponents to finish them off is similarly possible in this game and there are also ‘finishing moves’ of which I have only seen the cpu perform on me – see the image above. The game contains some interesting touches like the player(s) stamina bar, for instance carrying a barrel about can cause fatigue and start decreasing your energy bar.

There are other neat touches besides like  enemy taunts courtesy of speech samples that remind me very much of Konami games like The Adventures of Bayou Billy or Vendetta. The Strangers seems like a fun game that would shine best with two players but interestingly also there is three & four player competitive modes as well if that is your bag.

Just to be clear, even though the game is originally for AmigaCD my cheats will only work with the 2015 AmigaCD32 port by Cobe. If you want to view the cheats, click here 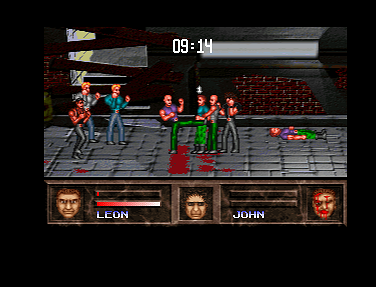